The basic rules for magic/tech/psionic items are as follows:
Certain upgrades will be one of the three types of tech or magic/psionic.
An item can GENERALLY only be clockwork/steam/Aelectricity(cannot stack multiple tech types).
An item can ONLY be magic or psionic.
All increases or decreases in cost effect crafting cost as well (so a +1 magic weapon costs 1100 to craft instead of 1000.)
All effects on an item stack to determine its price, so a +2 clockwork item, that gets a +1 enhancement bonus added to it would count as a +3 item as far as cost was concerned. (Upgrading from a +2 to a +3 is normally 10,000k. As this is magic you add another 10%, and as it is adding onto a tech item, that is another 10%. So the total for this example would be 12k, or 6k if self crafting.)

Unless stated otherwise, all tech items/enhancements function the same as if the item was magic/psionic – they are just tech based instead. 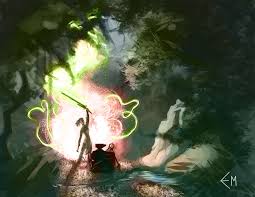 Tech Crafting
The Spell prerequisite for Tech items now have “schematics” associated with them. For instance, you may make a schematic of “Bull’s Strength”. This Schematic can then be used as a prerequisite for any item that requires “Bull’s Strength.” The DC to craft a schematic is 10+CL of the spell being mimicked. Any tech crafting skill can be used to make a schematic, and they are interchangeable amongst the techs(So a Bulls strength Schematic could be used for all 3 techs if applicable). It costs the amount of a scroll of that spell level for a wizard/cleric to create your own, and double that amount if buying them on the open market. It takes a number of days equal to the spells level to craft a schematic. While you may share schematics, only one person may use the schematic in a given day. You must be able to read the language of a schematic to use it, and most are written in gnomish, though they can be made in any language.

Magic & Tech Crafting
Additionally, for each upgrade already on an (whether magical or tech) item the DC increases by 1 and the enchantment value of the enhancement, whichever is higher. Flat rate enhancements (ie. flat cost base like greater shadow) add a single +1, no matter how much the cost. The highest level tech upgrade also incurs its tier value to the dc, but only the highest one and only once.